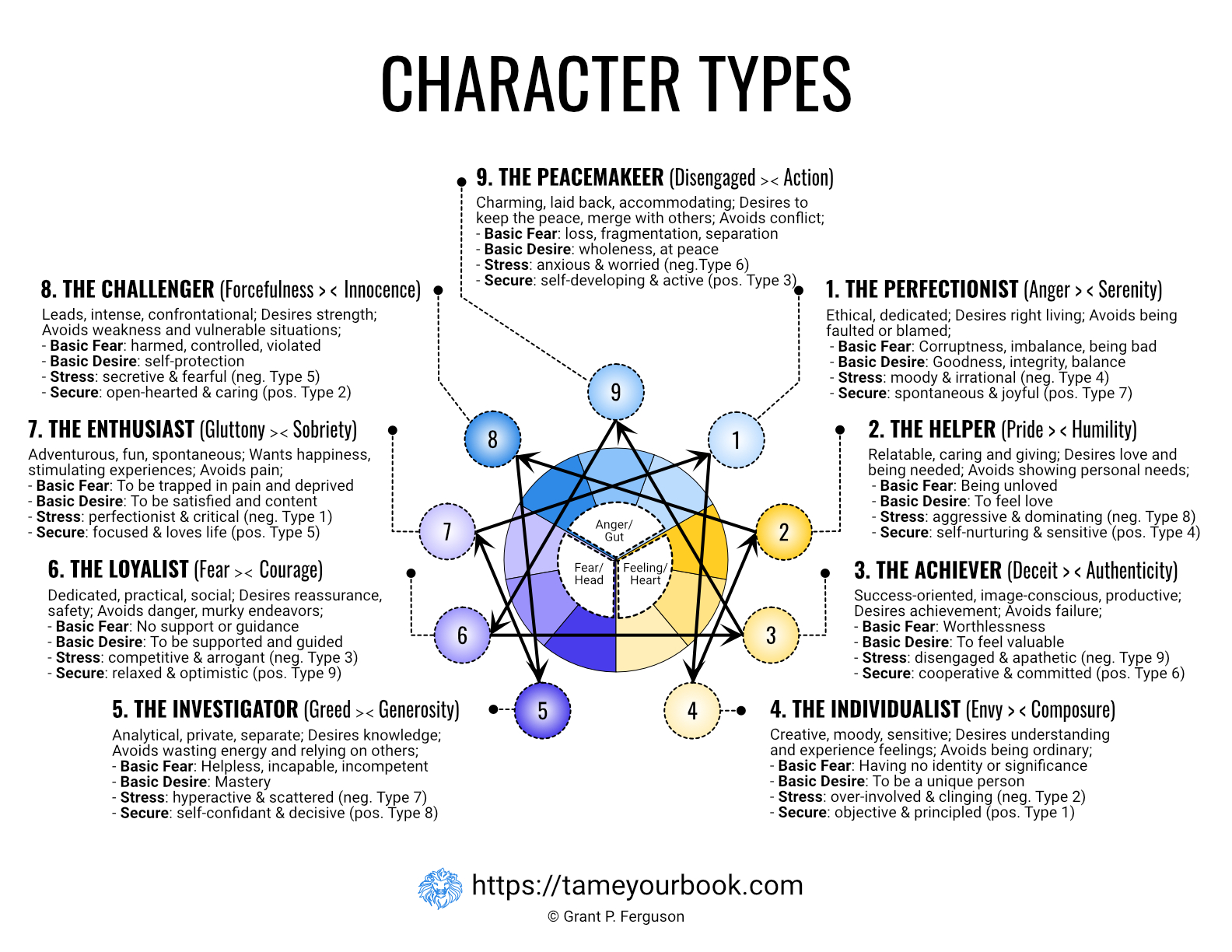 Even though developing fictional people fascinates me, updating the character template for my favorite writing app proved harder than I expected. Here’s why.

I’m probably not much different that most writers. Pulling together the many pieces of a novel intrigues me more than character development. That’s why updating my character template proved harder than expected.

But for many writers, me included, the missing piece to the writing puzzle is the development of characters who react realistically to plot events.

Fortunately, I discovered how the Enneagram of Personality could provide that crucial piece.

The Enneagram of Personality

The Enneagram of Personality describes the interconnected patterns of how people see the world and manage their emotions. Since the 1950s, theorists have tested the Enneagram and documented their findings.

By understanding each personality type’s traits and behaviors, you can show readers how your fictional characters approach life, such as romantic relationships, career choices, and friendships.

In your novel, you can use this body of knowledge to create villains, heroes, and supporting cast members — characters who react to fictional people and events with realistic emotions and behaviors.

The Danger of Falling into a Bottomless Rabbit Hole

The Enneagram theory set my imagination on fire. I envisioned an updated character template for my writing app.

However, for writers who like to research (me!), exploring the many character traits and behaviors is like a bottomless rabbit hole.

My reference library will attest to that danger, with a half-dozen Enneagram-related titles lining the digital shelf.

To avoid wasting time, I needed a straightforward way to understand and apply Enneagram theory to character development.

Unless you spend an inordinate amount of time studying Enneagram theory, it’s hard to understand the relationships between characters.

I looked at the different takes on the problem, such as mythic character archetypes, or the hero’s journey (monomyth) popularized by Joseph Campbell.

Why Use Enneagram Types

After surveying these methods, I chose the Enneagram approach because the nine character types clearly defined essential traits and behaviors.

You can use these types as the starting point to introduce a character to your audience. Then, as the story unfolds, like a real person, the fictional character reacts emotionally to plot events with negative or positive behaviors.

Those emotions are what readers crave!

A Character Template Is Only A Tool

To be clear, a character template for your favorite writing app will not make you a bestselling author.

For example, not all popular novels have primary characters who change as the story progresses — but most do.

How you use a character template boils down to who you’re writing for.

The majority of readers expect characters to:

A robust character template helps you fulfill your readers’ expectations.

I wanted a character template based on the Enneagram of Personality. This update achieves that goal and brings together many tips in one convenient package.

If that’s of interest to you, check out the updated character template page.

How do you go about developing multi-dimensioned characters?