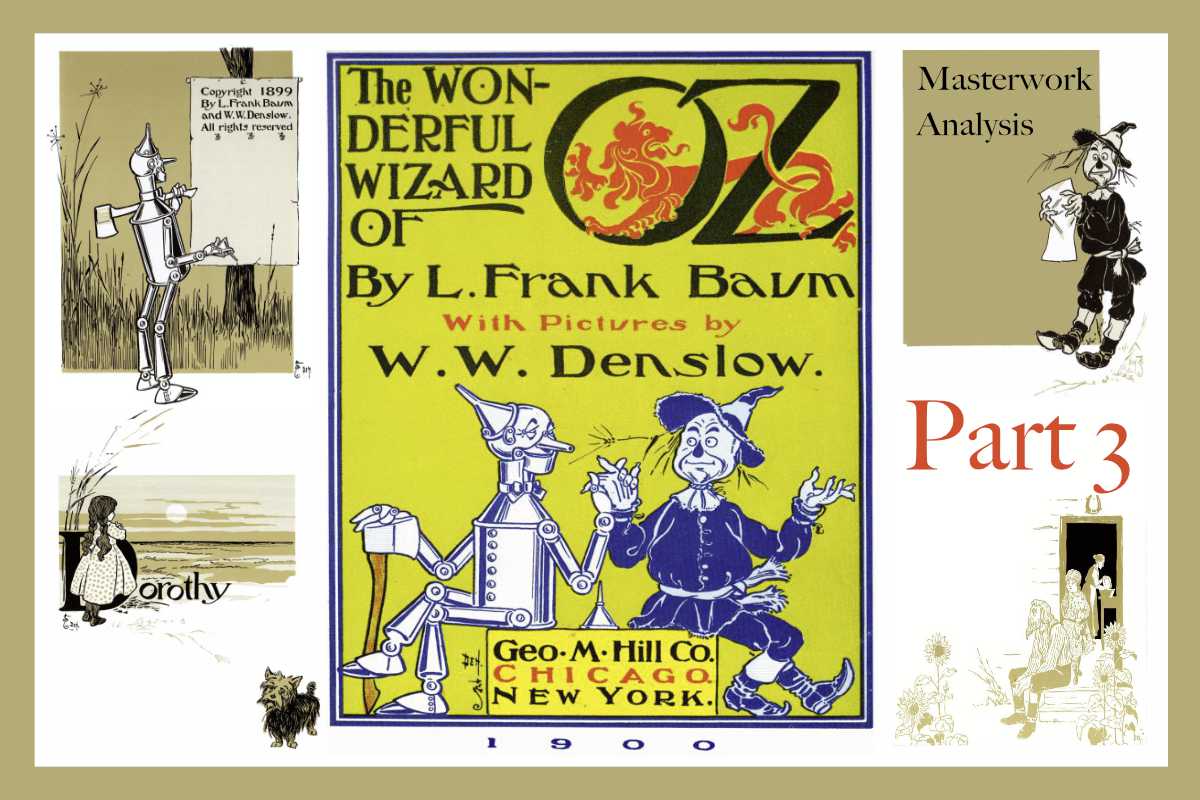 In this series on personalizing story structure, Part 3 explores how the Global Story Beats apply to Act 2A of L. Frank Baum’s action fantasy, The Wonderful Wizard of Oz.

This week, we’ll analyze 6 through 9 of the 18 Global Story Beats: RESPONSE, POWER PLAY 1, PREMISE, and MIDPOINT.

In this sequence of scenes, the chief protagonist responds to the unstable world, and meets who will help the lead learn the internal theme.

The new character (“helper”) can be a co-protagonist, love interest, a nemesis, a mentor, a family member, or a friend. Whoever fills this role has a story that will provide a departure from the hero’s story.

This scene shows the antagonist’s power, provides clues, and establishes the core conflict.

This scene represents a small but important turning point in the story, reminding readers of the antagonist’s ability to thwart the chief protagonist’s goal.

POWER PLAY 1 shows a mixture of internal and external obstacles. The lead’s “need” is an internal obstacle to the external “want”, and the antagonist also represents an external barrier to the lead’s goal.

The scene provides additional information for the plot and serves as the setup for the MIDPOINT and POWER PLAY 2.

Each POWER PLAY foreshadows what will happen in BATTLE 1, BATTLE 2, and CLIMAX.

POWER PLAY 1 and POWER PLAY 2 scenes help with pacing, increasing the suspense by reminding readers what is at stake. Also, POWER PLAY 1 scene plants a seed of tension—a denial of an expected or desired action. This inaction embeds a detail that contributes to more tension in a later scene.

This sequence of scenes fulfills the novel’s premise, giving readers the events and emotions they crave.

The PREMISE delivers on the book’s promise and increases the intensity of events until the MIDPOINT. In the thick of things, the chief protagonist either loves or hates the action.

From the POWER PLAY 1 scene, the lead gained a sense of what might happen, but not the details. The PREMISE scenes increase tension and fear (i.e., the “seed of tension” grows).

The events challenge lead’s ability to handle things in the unstable world, and throughout these scenes and up to the MIDPOINT, it’s not clear if the chief protagonist will fail or succeed.

This scene shows the chief protagonist’s status (i.e., winning or losing), increases the stakes, and gives the protagonist insight, shifting the focus from want to need.

At MIDPOINT, the PREMISE sequence culminates in either a false victory (the lead has been succeeding) or a false defeat (the lead has been floundering). By the end of the MIDPOINT, something raises the stakes and “insight” subtly shifts the focus from the external goal to the need for change (i.e., the need to learn the theme). A character from the RESPONSE scenes contributes to this shift in the lead’s focus.

The lead shifts from reaction to action, concentrating on how to overcome the antagonist’s obstacles. The lead gains some insight into what it takes to master character flaws.

The insights in MIDPOINT represent the shift from reaction to action, but it’s only the beginning of the long process because chief protagonist’s newfound knowledge does not equate to applied wisdom.

Pinpoint what in the story’s middle culminates in the lead’s false victory or false defeat, raising stakes and forcing the chief protagonist to continue toward genuine change. The latter requires the individual to move beyond mere awareness of the “need,” and begin applying the life lesson to make actual progress toward achieving the “want.”

Act 2A Wrap Up

In an upcoming post, Act 2B will show how L. Frank Baum had Dorothy and friends deal with setbacks and increasing stakes in the unstable world.

As you write, do you sometimes deviate from story structure to emphasize a point, increase tension, or stretch out suspense, and if yes, describe how?