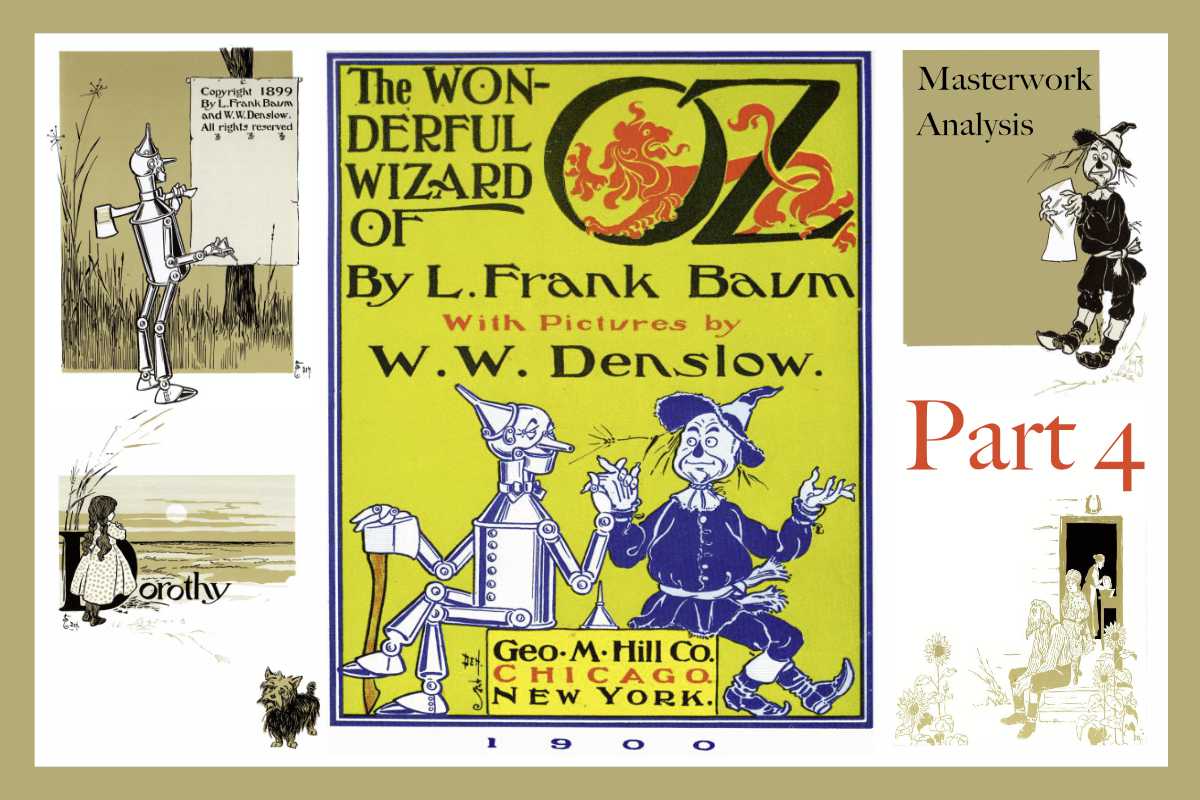 In Robert McKee’s book Story, he wrote, “When talented people write badly, it’s generally for one of two reasons: either they’re blinded by an idea they feel compelled to prove or they’re driven by an emotion they must express. When talented people write well, it is generally for this reason: they’re moved by a desire to touch the audience.” For over a hundred years, L. Frank Baum’s masterwork, The Wonderful Wizard of Oz, has touched readers. Today, discover how the Global Story Beats apply to Act 2B.

In this sequence of scenes, the chief protagonist takes action based on discovery, changing the lead’s trajectory (i.e., up or down).

The MIDPOINT influences the ACTION scenes:

The lead’s discovery at MIDPOINT inspires action despite the obstacles and character flaws.

But regardless of the up or down trajectory, the lead’s unabating flaws and antagonists’ unrelenting attacks take a toll. The bad guys never give up and neither do the lead character’s issues. The lead must brave internal demons and external forces until the PLUNGE INTO 3.

This scene hints at what is coming when the chief protagonist PLUNGES INTO 3, emphasizing the ever-increasing stakes.

The second POWER PLAY reminds readers and lead of what’s at stake. This scene focuses on the Moral Choice question. For example: How far will the lead go to defeat the antagonist and achieve goal?

The scene also forces the lead to make another choice: prepare for the BATTLE 1 with the antagonist or turn tail and run? The lead’s answer results in the resolve to do whatever it takes to achieve the story goal.

In this sequence of scenes, the chief protagonist fights the primary antagonist, and appears to win BATTLE 1.

When the antagonist seems posed to win, the lead’s flaw presents the most significant obstacle to defeating the external force, reinforcing the need for the character to change. Despite the flaw, the lead rebounds and claims victory.

In terms of action, it’s a slugfest, building tension and excitement with each scene. Even though the lead emerges as the winner in this sequence, it’s the story’s FALSE ENDING.

The upcoming PLUNGE INTO 3 will wipe out the victory and emphasize a reversal of fortune.

Act 2B Wrap Up

In the next post, Act 3 will show how L. Frank Baum had Dorothy and friends build suspense, tension, and stakes as they progress toward the CLIMAX.

How do you avoid the “muddle of the middle” and eliminate a lull in the action?