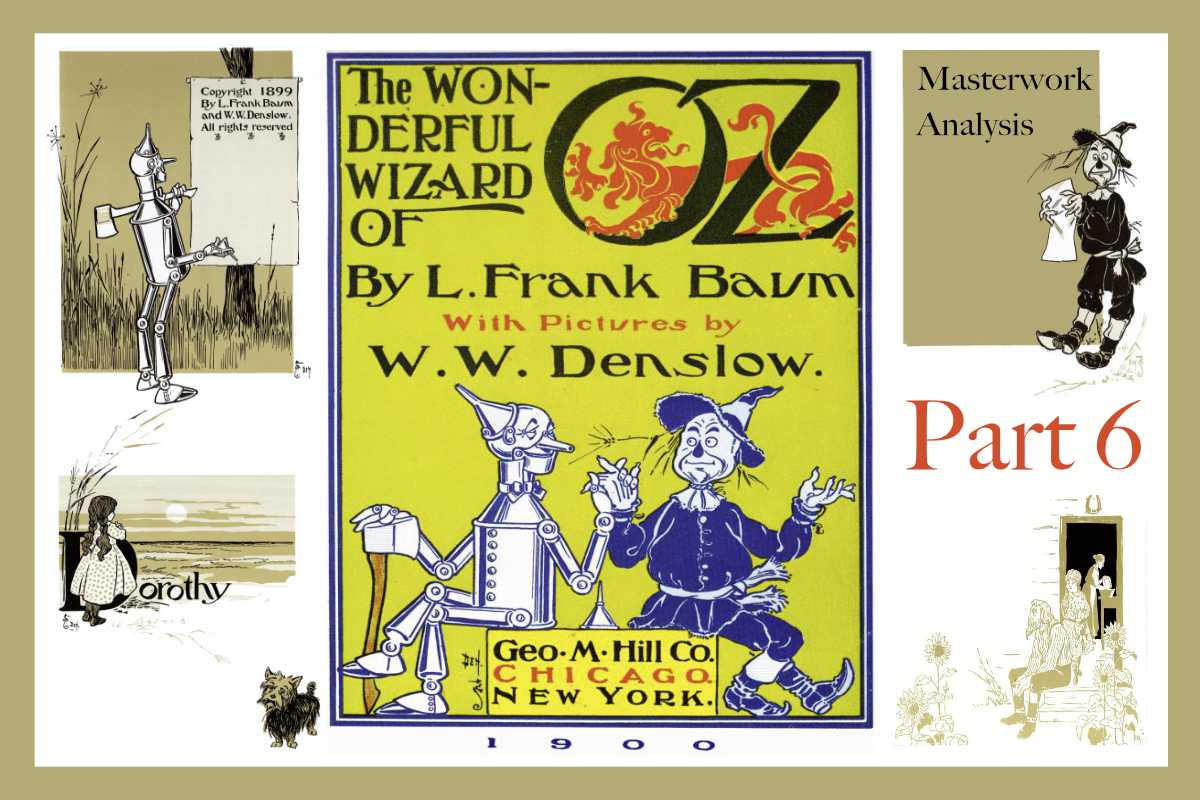 Robert McKee shared this wisdom. “Writing is a marathon, not a sprint.” The finish line is in sight for this series on L. Frank Baum’s action fantasy, The Wonderful Wizard of Oz. I’ll use the Preparation step from 7-Step Storytelling to emphasize essential takeaways.

If you’re unfamiliar with 7-Step Storytelling, click here for an overview. The preparation step fleshes out the premise, characters, plot, and themes.

While researching The Wonderful Wizard of Oz book, I came across this humorous premise for an airing of The Wizard of Oz movie on TCM.

Transported to a surreal landscape, a young girl kills the first person she meets and then teams up with three strangers to kill again. — Rick Polito

Here’s my take on the book’s premise:

When a tornado whisks a curious young girl into the clouds, she arrives shaken yet uninjured in a strange land, where she and three companions face endless obstacles from witches, environment, and a bad wizard as she struggles to return home, and along the way she discovers the secret to her happiness.

Tip: The premise serves as your strategic compass as you follow the map marked by the Global Story Beats.

The antagonists took the form of humans, creatures, and environment, each designed to draw out an emotional response from the protagonists and audience.

The supporting cast members gave readers insights into the positive and negative traits of the protagonists.

Tip: Even when the co-protagonists share the spotlight with the chief protagonist, make clear who is the lead.

The Global Story Beats empower writers to simplify summarizing the first to last page of your novel in 1,000 to 1,500 words. For more information about story structure, click here.

Here’s an example of a beat-by-beat synopsis.

Tip: Use the Global Story Beats to outline your novel’s scenes before writing, or perform an analysis afterwards. Either way, the combination of the synopsis and individual scene summaries helps you benchmark whether your story is working. Building a Story Spine and plotting the Story Body help you outline your story before you write.

Note: You’ll find the creation of a beat-by-beat synopsis is not a once-and-done process. Instead, you’ll update the beats and scenes as you fix issues and come up with more ideas.

The external theme of the book is when home-life prevails, a person feels secure and loved. When the tornado whisked Dorothy away from Kansas, she was torn from her home life — the status quo (i.e., the stable world).

In scene 8, Dorothy reinforces the external theme in this statement to Scarecrow.

“No matter how dreary and gray our homes are, we people of flesh and blood would rather live there than in any other country, be it ever so beautiful. There is no place like home.”

Although not conclusive in the THRUST INTO 2 (scene 10), there are hints that the combination of Scarecrow, Tin Woodman, and Cowardly Lion will help Dorothy learn the inner theme: when self-sufficiency prevails, a person is not dependent on others to overcome adversity (i.e., the person is not a victim of circumstances).

In the PLUNGE INTO 3 (scene 37), Dorothy demonstrates she has learned the life lesson, and commits to overcome her situation.

“Suppose we call the field mice,” she suggested. “They could probably tell us the way to the Emerald City.”

In scene 38, Dorothy acts on her choice, highlighting how she is no longer the victim of circumstances.

In the CLIMAX (scene 51), the Good Witch Glinda confirms that Dorothy already had the power of the silver shoes to take her back home, but even if she had possessed that knowledge, she also had to exercise her self-sufficiency with a decision and action — an excellent lesson for Baum’s target audience: young readers.

“Your Silver Shoes will carry you over the desert,” replied Glinda. “If you had known their power you could have gone back to your Aunt Em the very first day you came to this country.”

The characters confirm the truth of Glinda’s statement, and highlight how experiences teach valuable life lessons.

The philosophical theme is when good prevails, evil no longer has power over individuals. In scene 5, the “good witch” contrasts with the “wicked witch.”

Additional scenes emphasize good versus evil. For example, in scene 33, the leader of the Winged Monkey makes clear the overarching philosophical theme.

“We dare not harm this little girl,” he said to them, “for she is protected by the Power of Good, and that is greater than the Power of Evil. All we can do is to carry her to the castle of the Wicked Witch and leave her there.”

Tip: Study your chosen genre to determine dominant themes. Don’t worry about coming up with a new one. Themes are universal life lessons, and readers want to learn and experience the world vicariously through the thoughts, decisions, words, actions, and emotions of your characters.

Tip: Track the Hook, Setup, Trigger, Wrangle, Action, and Climax for each scene. Scrivener simplifies the process with the Custom Metadata feature, but you can do the same thing by making comments in your MS Word document or using a spreadsheet to track the information scene by scene. This habit will create scene-by-scene summaries for your entire novel.

The author ordered the scenes in a pattern that challenged the protagonist and co-protagonists to go through a try-and-fail cycle repeatedly. Each cycle raised the stakes, escalating the potential for physical, professional, or psychological death.

Because Baum used the try-and-fail cycle throughout the book, the ebb and flow of tension increased until its release in the RESOLUTION.

In the story, conflict resulted from opposing forces, including characters, nature, self, society, supernatural, and technology (e.g., Wizards Throne Room and his balloon). Tension occurred as readers expected more conflict. Suspense grew as the conflict remained unresolved, and readers wondered, What will happen next to Dorothy and her friends?

Tip: Story Beats help writers organize their stories, but genres suggest essential scenes, conventions, and tropes. Authors remain in control of what and where they place content. Just like a map, Global Story Beats show the most direct route to a desired destination; however, detours can entertain, inform, and inspire!

Except for scene 37 (i.e., the beginning of Chapter 14), where Baum briefly uses second person, the story is told from the third-person omniscient narrator point of view.

According to reedsy.com, “Third person omniscient is the point of view where the narrator takes a ‘God’s Eye View,’ freely relating the thoughts of any character and any part of the backstory. The word literally means ‘all-knowing,’ so third-person omniscient narrators are not usually active characters in the story but have an external narrative voice.” It’s probably the oldest form of storytelling.

In contrast, second person point of view, the author directly addresses the reader by using the pronoun ‘you.’

Tip: Make your point of view choice before writing to save time and frustration. For example, switching from first person to third person requires rewriting. Also, readers often associate a point of view with a genre. Baum’s choice to use third person omniscient aligns with the action fantasy genre. In contrast, many authors use third-person limited for thrillers and mysteries, where the narrative viewpoint is told from the close perspective of one character.

The Wonderful Wizard of Oz continues to delight readers of all ages. For writers, this masterwork is worthy of in-depth study, especially Baum’s consistent and artful use of beats to capture and hold the audience’s attention.

What other masterworks have you studied? Recommendations for another deep dive?