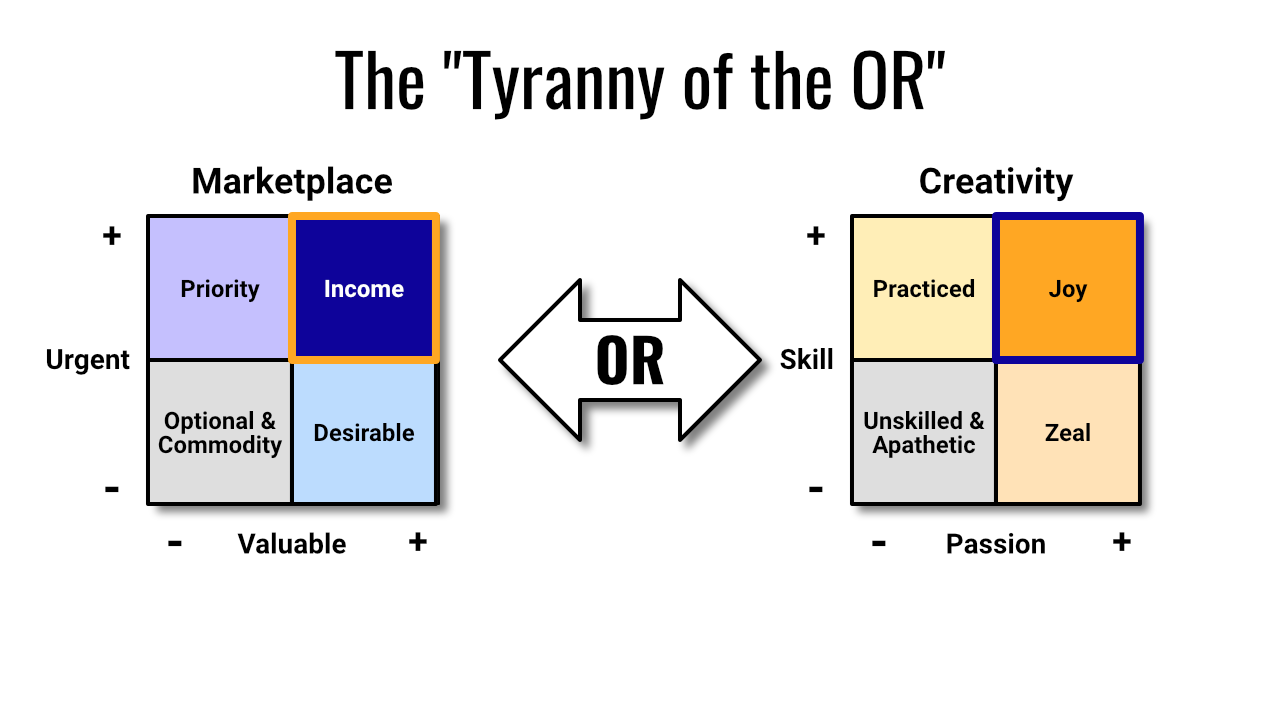 Sherlock Holmes had his nemesis, the criminal mastermind Professor James Moriarty. My dreaded adversary, the “Tyranny of the OR,” threatened to steal my joy. Here’s how I overcame my enemy.

What Is the Tyranny of the OR?

Decades ago I came across an article titled the “Tyranny of the OR.” Later, I read Built to Last by Jim Collins and Jerry Porras. The authors explained how people and organizations often limit their options to A or B. This form of tyranny oppresses creativity, leading to myopic thinking, planning, and execution.

In contrast, replacing the ‘OR’ with ‘AND’ liberates your creativity.

Battling the Tyranny of the OR

As a busy writer, you’re aware of the many demands on your time and energy.

For example, how do you balance writing with other aspects of your life? A common writer’s dilemma demands you choose between writing for joy or income. Both are important to you, but the Tyranny of the OR forces you to prioritize one over the other.

With such a dilemma, it may seem like you can’t replace OR with AND.

The Tyranny of the OR Influences Goal Setting

Urgent and valuable topics have the potential to generate writing revenue.

However, that singular focus doesn’t consider the writer’s skills and passions. People who make money while sacrificing their joy hate what they’re doing. If you’ve ever worn those golden handcuffs, you know that money alone doesn’t make up for what you’re missing from life.

For 2023, I wanted to explore goals that could deliver both income AND joy.

Here’s what the Tyranny of the OR looks like when you pit income against joy.

Replace OR with AND

But if you want income AND joy, you’ll take a different approach to discover the unique niches.

Find the Intersection of the Marketplace AND Your Creativity

Notice the shared areas where AND replaces OR, especially the niche at the center.

It takes effort to explore the marketplace to see what people feel is both a priority and desirable. Likewise, it takes reflection on what you’re practiced at doing and what you have a zeal to keep doing. Admittedly, it’s difficult to weave together the marketplace with your creativity, but with effort, it’s doable!

You’ll find the greatest emotional and monetary rewards rest where your skill and passion intersect with what people urgently want and value.

The Tyranny of the OR in the Marketplace

Writers ask, “Should I learn how to research the marketplace OR just write what I love?”

The probability of writing something people want to read increases when you know what they’re buying. Fortunately, you don’t have to do this on your own. A tool like Publisher Rocket* and research from K-lytics** simplifies exploring the marketplace.

Writing tools and research reports are investments in your writing future.

Personal reflection offers an opportunity for you to identify essential talents, often earmarked by initial failures followed by ultimate success.

I encourage you to read interviews with writers. Many authors speak of an inexplicable urge to write, setting them on a path to learn the craft. With candor, they often describe several try-and-fail cycles, emphasizing the iterative nature of writing.

Read several interviews and you’ll soon notice that, for some, writing alone provides ample joy, but others want the emotional and monetary rewards that come from publishing and selling their work.

No single path is right for every writer.

For instance, I want to write a book readers will love — a novel with a chance of commercial viability. Other writers hardly care if anyone reads their stories or poems, and they just love to write. And then there are those who straddle the fence.

To be clear, there’s nothing wrong with just wanting to write. But if you want to create and sell novels, consider replacing OR with AND to find the intersection of your creativity and the marketplace.

*Dave Chesson and his support team are the real-deal. They’re tireless in their efforts to deliver the best research tool. I’m an affiliate of Publisher Rocket, and if you purchase the app, I may earn a small commission, but you won’t pay a penny more! And for the record, even if I wasn’t an affiliate, I’d still recommend this amazing tool.

**Alex Newton is also the real-deal. Before I bought my first report, I had a question. Even though he’s based in the UK, I got a timely reply. BTW: I’m not an affiliate, and the paid report was top-notch!