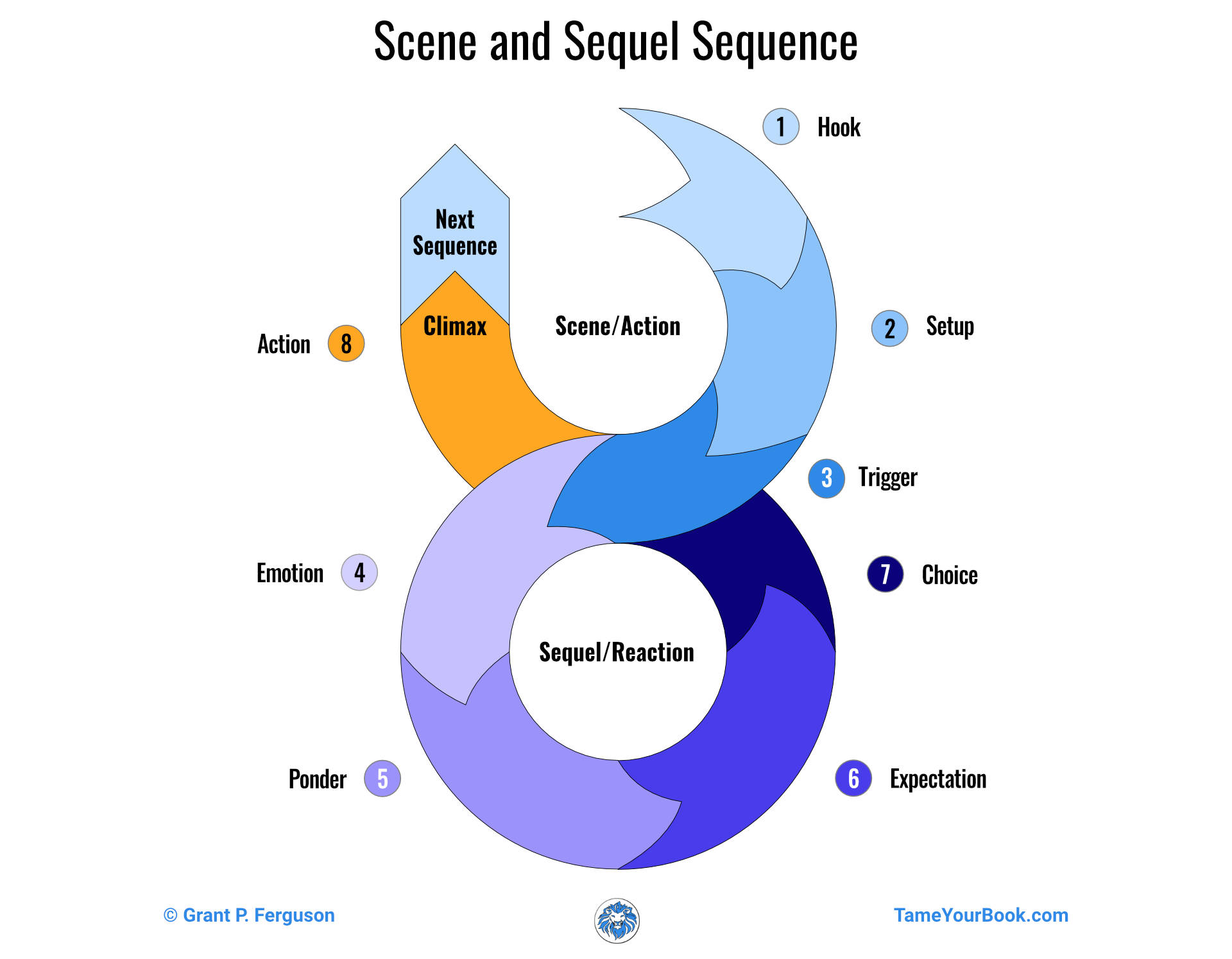 An internet search for “scene and sequel” will net you many definitions. Today’s post offers guidelines and 8 beats to structure the scene and sequel sequence.

What Is the Scene and Sequel Sequence?

A scene and sequel sequence is an action followed by a reaction.

Are Action and Reaction Shown in Separate Scenes?

Because the term “scene” is used to describe the action event, writers may think the “sequel” is always a different scene. As you read fiction, you’ll notice the “action” and “reaction” can and often appear within the same scene.

There are no hard rules, so you choose whether the sequence occurs within one scene, or in separate action and reaction scenes. Before you decide, read novels within your chosen genre to discover the style used most frequently by popular authors.

The “Scene” Part of the Scene and Sequel Sequence

The “scene” event shows an action that progresses the story’s plot, justifying a conflict (aka obstacle) and denying the character’s achievement of a goal.

The “Sequel” Part of the Scene and Sequel Sequence

The “sequel” shows how the denied goal registers emotionally with the character.

Why Is the Reaction in the Sequel Important?

The sequel bonds your character to the reader through emotions. Scan reviews of bestselling novels and you find readers often buy a book for the plot but stay with a series because they love the characters and their emotions.

The sequel emphasizes what matters most to your readers.

The Beats of the Scene and Sequel Sequence

At the micro-level, 8 beats comprise the scene and sequel sequence.

2. Setup: Early information establishes the characters and location, and includes the setup for potential conflict (i.e., an obstacle to the protagonist achieving the scene’s goal).

3. Trigger: An event serves as the trigger that forces to the surface a conflict (aka an obstacle) that prevents the character from achieving the goal.

4. Emotion: The character’s reaction to the event conveys emotion.

5. Ponder: The protagonist ponders those prior decisions and actions that led up to the event, and may include a dilemma comprising two choices that have different but equally unfavorable consequences.

6. Expectation: The character’s moment of reflection sets an expectation of what the individual could do to progress toward the scene’s goal.

7. Choice: The protagonist makes a tough choice to take action.

8. Action: The character takes action, and the outcome sets up a new goal for the next scene and sequel sequence. For example, the scene:

An Outline Example of the 8-Beat Scene and Sequel Sequence

Put the Scene and Sequel Sequence to Work

If you like to preplan your scenes, use the 8 beats to create simple outlines like the example above. Or if you prefer to free-write first, use the checklist to organize and enhance your scenes later.

The scene and sequel sequence creates a bond between your readers and characters, giving your audience the action and emotions they crave.

How do you make sure your scenes include the action and emotion to capture and hold your readers’ attention?