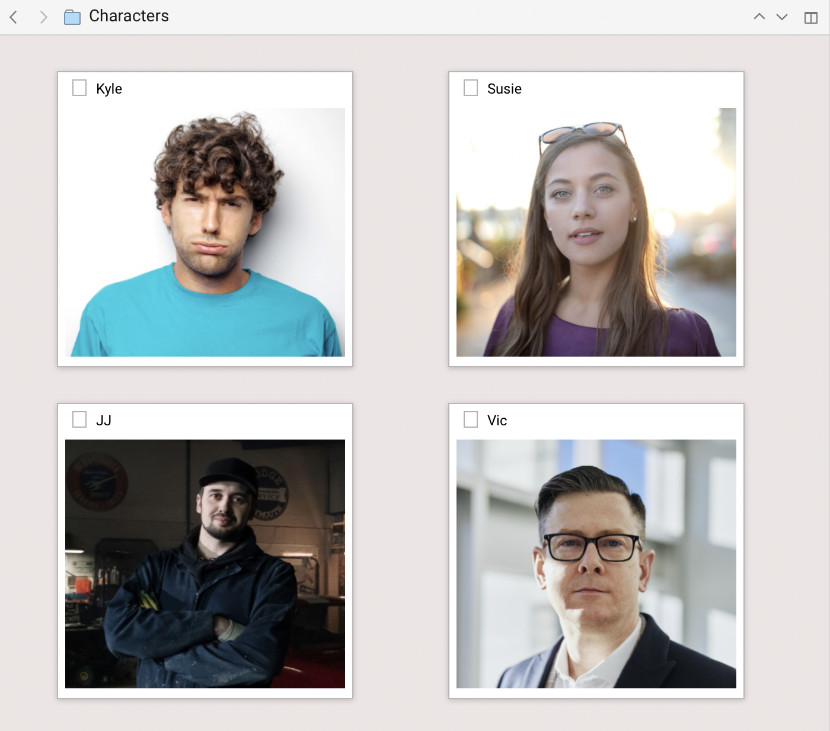 Replace the basic Character Sketch with an improved free character template for Scrivener. Use this template as the foundation for dynamic character development.

Characters and plot go together like wet and water. Plot events force characters to face conflicts, and their reactions convey the emotions your readers crave.

Stories that deliver meaningful life lessons resonate with audiences. But this requires finesse because readers sense whether a character’s emotions and behaviors portray realistic reactions to plot events.

In Scrivener’s binder, you’ll find the Character Sketch stored within the Template Sheets folder. It’s a simple document, a list of prompts that you can edit, rename, or replace, and useful for creating a basic profile.

Instead of editing the basic Character Sketch, we’ll replace it with the Character Template. But first, let’s consider the desired result.

The Character Template is an upgrade from the Character Sketch, but it’s just the foundation. While perfect for profiling characters, dynamic character development requires even more details.

To better understand character transformations and arcs, I discovered the Enneagram of Personality (Wikipedia) and marveled at how the nine character types reflect real-world traits and behaviors.

Even after a studying several books and websites, I still needed to sort the details. So for quick reference, I created this infographic.

The Character Types show the core tendencies and inner conflicts, including the basic fear, basic desire, and stress reaction — the details required for dynamic character development.

To build on the Character Template’s firm foundation, Character Types could help me develop:

With each Character Type, you can select one of the nine starting development levels. The infographic below serves as a quick reference to show the range of traits and behaviors:

The Character Development Matrix shows how traits and behaviors change based on whether the character feels more secure (relaxed) or insecure (stressed).

An Example of Character Type and Development Levels

Below are excerpts from the lead character’s profile developed for a thriller. In this example, the Type 8: The Challenger offered many positive and negative traits for developing the story’s hero, Kyle West.

Current Development: In this plot, at development level 6, Kyle became combative and intimidating to get his way, creating adversarial relationships. For Kyle, everything became a test of wills, and he would not back down. He used threats and reprisals to coerce obedience from employees, keeping people off balance and feeling insecure. But Kyle’s unjust treatment of workers made them fear and resent him, so they banded together against him. When he tried to control and intimidate his boss, Kyle got fired — a significant event integral to his arrival in the story’s setting.

Behavioral Changes Based on the Character Feeling Insecure (Stressed)

Stress Progression: If the plot events add more stress, then based on his words and angry behaviors, Kyle could appear vengeful and even barbaric. At work, people could gossip and wonder if Kyle might seek revenge for his wife’s murder. Kyle’s confrontational behaviors could appear at odds with his level-3 persona prior to the deaths of his wife and parents. Unabated stress could cause Kyle to spiral downward with negative emotions and behaviors. For example:

Behavioral Changes Based on the Character Feeling Secure (Relaxed)

Secure Progression: If the plot makes Kyle feel more secure, then the prior two years that caused Kyle to slip into aggressive and confrontational behaviors could dissipate. For instance, if he masters himself, Kyle could use his renewed strengths to improve the lives of other, even becoming heroic. And if he continues feeling secure, he could progress upward toward optimal emotions and behaviors. For example:

What would cause Kyle to fall from a development level 3 to a 6?

In Kyle’s backstory, he was a development level 3 before the unsolved murder of his wife. Then, a tragic automobile accident killed his parents as they traveled to attend his wife’s funeral. The backstory dribbles out from Act 1 through the Midpoint, showing readers why Kyle teeters on the edge of an emotional abyss.

Readers want an emotional payoff — to see Kyle change — so they keep turning pages. As the story unfolds, the audience hopes Kyle will become worthy of Susie — his love interest. Together, they race to solve the murder before the killer strikes again.

How to Use the Free Character Template for Scrivener

Once you complete the above steps, the Character Template is ready to use. You can assign a name to the document within the binder. Then open the document and complete the prompts. The contents of the original template remain unchanged, stored safely in the Templates Sheets folder.

How to Show an Image in the Character’s Synopsis

For inspiration, load an image for each character. Search for an image to serve as a character’s avatar. Keep in mind this image is for your private use and inspiration, so select a photo you think fits your vision of the character. Visit sites like Pixabay.com and Pexels.com, and discover free images for your characters.

Once you’ve downloaded an image, make sure the Scrivener’s Inspector is visible, select the Synopsis, and within the Synopsis window, click the picture Toggle to show the image.

This changes the Synopsis from text to accept an image.

Drag and drop an image of your character into the Synopsis.

Once you’ve added images, highlight your Characters folder in the binder. Then select Corkboard to see all the character images.

Now you have an inspirational image and you can toggle back to text to add a synopsis of a character’s role.

Sign up for the Character Template, and I’ll share a link for more information about Dynamic Character Development.