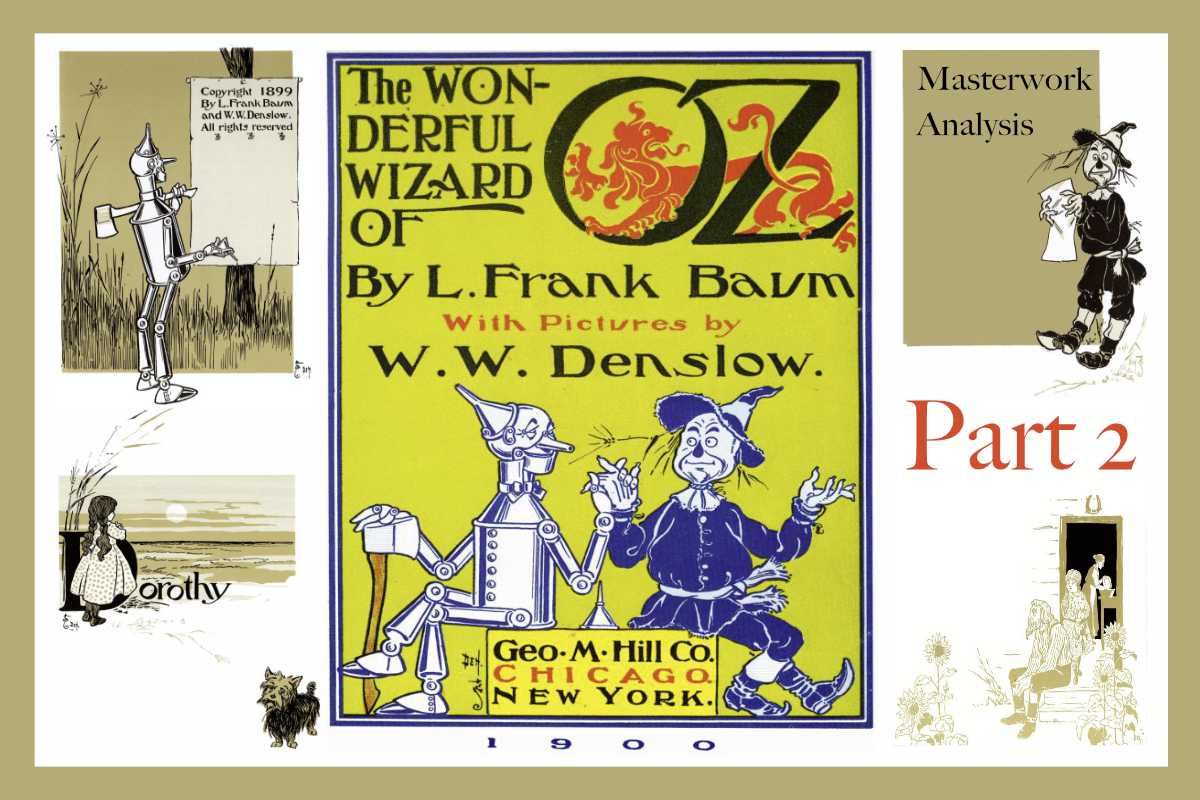 The name is not important. What’s significant is GSB allows you to break down films and books into patterns that consistently work. Those effective formats are as old as storytelling.

If you missed last week’s post, I encourage you to read Part 1: Do You Want to Personalize Story Structure? Now You Can!

There is no single right way to structure stories. Instead, GSB is like a map, not a formula. Writers remain in control of all elements.

Many (but not all) story structures adhere to three acts. Stories start with a stable world, and at the end of the first act, a disruptive event thrusts the chief protagonist into the unstable world of the second act. After a series of events, the lead character plunges into the changed world of the third act. The Global Story Beats divide the second act into sub-parts A and B.

I separated Baum’s work into scenes, linked each synopsis to the full text in an online copy, added illustrations by W. W. Denslow, and based the divisions and summaries on sub-beats (shown as lowercase to differentiate from the uppercase Global Story Beats).

The answers to scene sub-beat questions and scene summaries are my interpretations of the story. Your perspectives may differ, and that’s okay. Our creative differences can surprise and delight audiences!

Offers something new or references the foreshadowing established in a prior scene. For example:

Provides brief information regarding the character and current location.

Forces a problem to the surface of the scene

Shows lead reflecting briefly on the choices and actions required to deal with the problem.

Moves character from the scene PROBLEM toward the scene GOAL (or WANT) based on lead’s choice and action.

Shows the outcome of character trying to achieve goal (or want) and sets up the drive to the next scene. For example:

In this week’s post, we’ll analyze 1 through 5 of the 18 Global Story Beats: SETUP, HOOK, TRIGGER, WRANGLE, and THRUST INTO 2.

The scenes introduce the supporting cast of characters, the chief protagonists goal (i.e., the “want”), the lead character’s reluctance to change (i.e., the “need” to learn a life lesson), hints at the stakes (i.e., the bad things that will happen if unsuccessful attaining goal), and something happens that makes the lead appealing to readers.

A character (typically not the chief protagonist) hints at what the lead must learn to satisfy the need (e.g., forgiveness, love, acceptance, faith, fear, trust, survival, selflessness, responsibility).

The SETUP combines elements intended to resonate with the audience’s emotions.

The scene introduces essential aspects of the story and grabs readers with an intense need to know what happens next. Note: The HOOK is part of the SETUP sequence of scenes.

These critical details convey what the story is about, establish the actions required for upcoming events (e.g., characters and settings), and entertain readers (i.e., maintain interest).

The HOOK is an opportunity to make the chief protagonist appealing (i.e., likable), doing something that humanizes the character and hinting at one or more flaws through the lead’s thoughts, choices, conversations, or actions.

A major event triggers the disruption of the protagonist’s stable world, stopping the lead character from continuing as before.

The event is so disruptive, it will eventually thrust the chief protagonist into Act 2’s unstable world, and the lead cannot return to the way things were before the TRIGGER event.

Note: In the upcoming WRANGLE sequence, the lead resists the urge to engage, and instead, searches for some way to return to the way of life before the TRIGGER event.

In this sequence of scenes, the protagonist wrangles with move-forward choices but resists the need for change. As the lead debates the situation with self and others, this scene leverages the doubt and resistance established in the TRIGGER scene.

In this scene, the chief protagonist acts on the choices made in the WRANGLE sequence, thrusting the character into an unstable world of Act 2A.

Throughout Act 1, the chief protagonist grows more aware of what will become the story goal—the effort it will take to resolve the story problem. This event solidifies the story goal as the lead is THRUST INTO 2, an irreversible action—a point of no return.

Next week’s Act 2A will show how L. Frank Baum had Dorothy and friends deal with events in the unstable world.

Do you like to preplan with story structure, or use it later to edit your manuscript, and based on your preference, how does that influence your writing?